I'm not usually particularly spontaneous with my toddler activities.  I normally think through them, and plan and consider the consequences.  Normally.

But then the other day happened.  Actually, this whole summer happened.  It's been so hectic and the kids were melting down and transitions were melting down, and everything was melting down so I reached back in my memory to something I'd seen briefly on pinterest (that awful awful place...) and decided I'd make shaving cream paint!  Before thinking it through, I cheerfully called out "Hey Kids!  Want to go paint with new paint in the shower??" 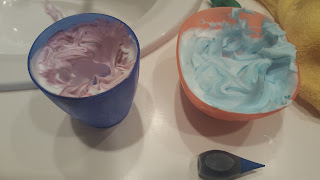 I made a few colors of 'paint' by just adding a few drops of food coloring to some shaving cream and swirling it around with my finger.  Deep down, I thought this might be a bad idea so I didn't add very much.

The good news is that it was a huge hit as an activity! 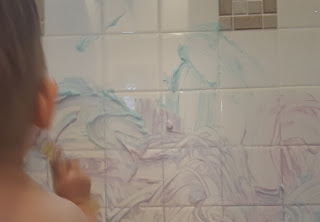 Both kids hopped in happily and smeared the colored cream everywhere.  They cooperated and let me wash their hair and bodies with minimal complaint. 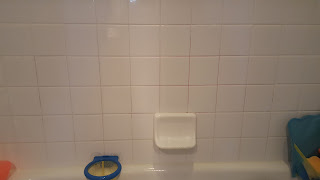 My grout is now pink and blue and purple and grey.  And gross looking.

I'm sure I'll eventually be able to get it clean, but in the meantime I'll use this as a reminder of WHY I STRONGLY DISLIKE PINTEREST!  Just enough information to plant an idea in my head that just might come back to haunt me later....

Just say no to shaving cream shower paint.
Posted by Amy at 11:25 PM