I <3 concrete.  While I'm around concrete pours at work, I don't think I've mixed concrete myself since concrete lab in college.  That obviously needed to change.

After our recent yard remodel, we were actually left with MORE projects to do in the yard. One of them is the side yard.  I don't have a long term plan, but I was thinking it would be nice to have stepping stones through the area.  One thing lead to another and soon I was plotting out a Father's Day craft for the kids. 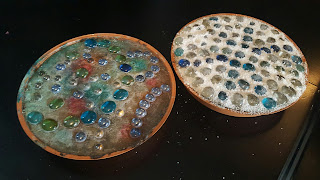 Supplies: (Links are just examples, I didn't buy any of this online, but in case you need a visual of what to look for!)

8" pot protectors: I bought mine at the 99 cent store.  I bought two different styles: the Clear ones seemed a little thin to me (they were 4/$1.00, the colored ones were 2/$1.00 and thicker) so I doubled them up.  I think they would have been fine, although I'm not sure they would have been sturdy enough to move while the conrete was wet.  I used 8".  Obviously you could use any size you wanted, but I thought 8" allowed enough room to be creative without getting overly heavy or requiring too much 'stuff' for decorating.

Pam or Vasaline to line pot protectors.  I tried both, both workd fine.  Pam was faster and easier.

Concrete:  Obviously a very important ingredient!  I bought a 60 lbs bag of quikrete (yellow bag) from Home Depot for about 5 bucks.  I wish they had 10 lbs bags (like the one I posted) because 60 lbs of concrete is, well, 60 lbs and it was kind of a monster to lift.  the concrete had a decent amount of small aggregate, and if I do the project again I may try a different mix, but the results were about the same when I sifted out some of the aggregate and when I left it in.  My 60 lbs bag made 13 8" stones.

Trowel: I'm not sure this is absolutely necessary, but I couldn't think of an easy and effective way to smooth out the surface of the concete without one. Besides, now I own a trowel.

Decorations:  Whatever you want to decorate your stone with.  I really liked the idea of using glass beads.  We also used seashells, sea glass, sand and glitter.

I generally like to try things myself before attempting it with my kids, so I did a trial run first with my awesome co-crafter.  I was pretty sure it was going to be a huge failure.  I didn't think I got the consistency of the concrete right, it felt too dry when I added it, too soupy when I finished it, but we pushed ahead.  I was pleasantly surprised when the results were pretty good!  I had originally thought about doing hand prints in the stones, but I decided it was going to be a bit too hectic to try to get the timing exactly right so opted to decorate instead.

I decided I already had the supplies and the clean up would be about the same for my kids or a bunch of kids, so I invited over some kids from the neighborhood to make them with us as well. 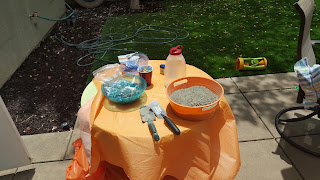 I used an old kitty litter bucket to mix the concrete.  One hint that really helped me was adding a bit of water first then adding the concrete mix.  I also put the lid back on and shock the bucket around some to mix things up (easier than using the shovel!)

I sprayed the the liners with pam and shoveled in some concrete in.  I shock the liners a bit to release airbubles and tapped them on the ground a few times.  I could see the bottom when using the clear tray so I knew when I had most of the air out, but since it was the bottom and I had a mob of ready to go kids, I didn't spend too much time vibrating the concrete.  Finally, smoothed the top with the trowel and it was time for the kids to get to work! 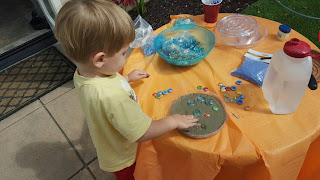 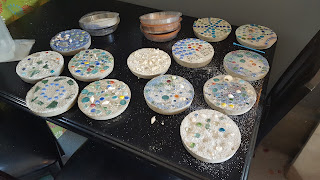 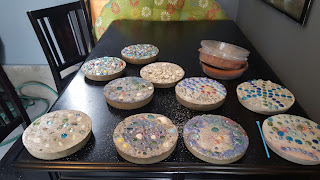 Regarding decorating, the flat bottomed beads stayed way better than round beads.  I decided to use the sand to give the concrete surface a bit of texture.  (Fun fact, sand is an ingredient of concrete and will mix in with the concrete, not a good place to do intriciate sand designs in other words).  If you look at the completed stones we have a few that we didn't use sand with, it really depends on which style you like better. I poured a ton of extra on top and just brushed it off when they were set.  I expect if you seal them, some of the sand will stay put, but otherwise, I'd expect most of it to wear off over time.

A few other thougths if you are considering this activity.

It's a good idea to have a bucket of clean water for the kids to wash their hands immediately when they are done.  Concrete isn't good for skin.  Also, avoid breathing concrete dust!

I put down a bunch of cheap table cloths down and it made clean up much easier.

I considered sealing them with concrete sealant.  I suspect that would help them last a bit longer, but I didn't get around to it and I wanted to get them in the yard.

Overall, this was an awesome project.  Even the very little kids did pretty well (the youngest who participated was just under 2) and I think it will be even more fun when the kids are a bit older.  Maybe I'll make it an annual project!