I didn't expect 'demo' to really involve much.  We were taking out a few trees that weren't doing too well and removing some grass, but really it shouldn't have been that big of a deal.

Except it kind of was.

There were apparently an abnormal amount of roots under our grass.  I can't really vouch for the validity of this statement since removals in my line of work invovle heavy equipment and roots don't really affect the speed of work.  It did seem like the guys digging spent alot of time fighting with them while doing electrical repairs, irrigation repairs and drainage upgrades.

So long not so healthy palms! 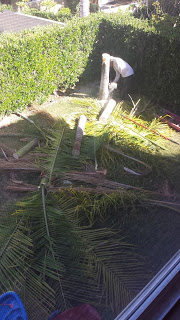 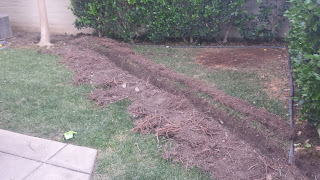 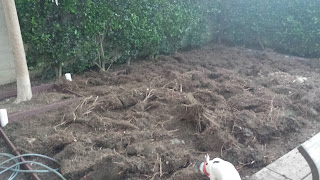 Demo was when we had our first real challenges.  Communication was a problem the entire project.  We rarely had notice of when workers would be on site and who they were and what they would be doing.  It was a short job and I didn't have much time to build a relationship with most of the crews directly and I was frequently frustrated.  Lesson learned.  Next time, I will require a preconstruction meeting of some sort and a list of the name and contact information for each worker who will be on my property.  It's not fool proof, but it's a start and I think it would have made my life much easier.  I work in construction, so I understand that things change and schedules have to be somewhat fluid, but having two babies in the house and random noise at random times was just too much.

But besides the general issues with communication, we had an acute issue  Our project was running behind and they requested to work over the weekend.  We agreed with the condition that the there be no noise.  So we were immensely unhappy when they began jack hammering at 7:00 am Saturday morning.   My husband immediately stopped them, but not before our neighbors (rightly) freaked out on them.  I spent my entire morning on damage control with our neighbors and embarrased and upset. Turns out the jack hammer was due to some abandoned concrete they encountered. (Thanks alot Taylor Woodrow and original contractor, are concrete washouts really that difficult to have and use?)

Our final problem was damage to existing facilities.  While everything was repaired, it was really frustrating for them to keep hiting and breaking things.  I asked one of the works several times if he had located the irrigation mainline prior to digging and he said yes.  After they left for the day while inspecting the work I found out he had indeed found it, and severed both it and the communication cable.  Very frusrating.

With everything out, we hoped that at least the noise part of the project was done.  We were mistaken, but that's for another update.
Posted by Amy at 8:52 PM