I was feeling a bit disenchanted about a month ago.  As a result of other trips that came up, our family vacation was postponed again this year.  I looked at my calendar and realized I hadn't had a real break from work since the baby was born.  We needed a vacation. The thought of researching and planning a trip and then flying with the kids was incredibly overwhelming....

And then I realized I'd always wanted to take the train!

The thought of spending 5+ hours on a train with two kids sounded way more fun that 5+ hours on a plane.  Plus, the pre-boarding and boarding process is faster on a train (way faster.  Like frighteningly fast.  Like better be close to a door because they aren't waiting for you fast.)

So I pulled up the Amtrak map and choose a destination.  My requirements were only that it be somewhere new and we not have to transfer trains.

I giddily called my husband to convince him.  He was significantly less excited than me, but acquiesced (although he did try to talk me down to one night.)  "No!  It takes me an entire day to just unwind, plus the hotel has a discount for three nights!"

So we were booked.  Three business class tickets to Santa Barbara on the Surf liner and three nights at the Harbor View Inn.  The hotel choice was a little more complicated then that.  I hate choosing a hotel without a recommendation. But my requirements were 1. Walking Distance to the Train Station. 2. Ocean view.  The Harbor View fit the bill and had pretty good reviews. It didn't have breakfast or suites, which are my preference when traveling with my kids, but this was an ADVENTURE.  So I booked it.

Two days before we left, I finally realized what I had undertaken. What if they hated it? What if the train gave them (or me!) motion sickness? What if we couldn't get two kids and our luggage on the train fast enough and they left us standing on the platform?  What if...

As always, I had a detailed packing list and I was even pickier than normal (I was only allowing us one suitcase, to maximize the chances that everyone got on the train successfully. 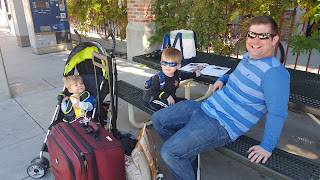 If it sounds like a lot, you've never travelled with children.

We also encouraged the boys to help. 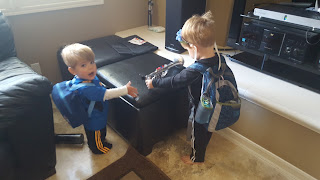 We arrived early and walked around the station, checked out the Amtrak office and talked to the very nice deputies.  Down town San Juan is one of our favorite hang outs, so it was nice to be launching from a familiar place.

Then the train arrived!  The conductor stepped out and said "Griffin Party?"  Ha! So I guess they weren't going to leave us after all!  We had Business class Seats and the Conductor had reserved a family table for us.  We got to our seats and started settling down.  That was worth the ticket price difference alone. 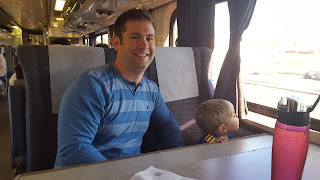 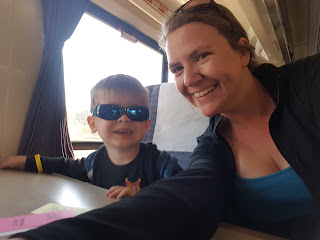 We rumbled off down the track.  The boys stared out the window for a few minutes before getting bored and needing some of the awesome train toys I had packed in their backpacks.  The conductor also gave Colin some tickets which he used to make a track for his new Engine. 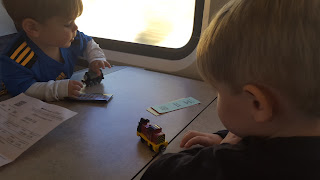 We were in for the long haul, so I tried to space out treats and snacks and toys.  As expected, Colin was easy.  He happily played, colored, and chatted.  Alex was a little bit harder.  He climbed over the table, dumped things on the ground and was generally a bit of a nuisance.  18 months is one of my favorite ages for everything so far except traveling.  It's kind of a nightmare for traveling.  After having his glasses yanked off for the zillionth time Gavin looked at me seriously and said "You get him all the way home." 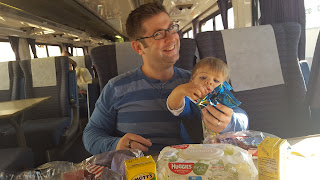 We pulled into Union Station where we picked up a new crew.  And wine!  They also delivered snack packs to our seat which were similar to the ones you can buy on airplanes.  Cookies, crackers, dried fruit, etc.  Then it was nap time... NOT! 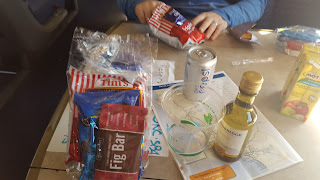 Still, everyone settled down and I sat looking lovingly at my family while sipping a glass of wine and staring out the window into the graffiti strewn back alleys of Los Angeles (picturesque this leg was not, but it was fascinating) 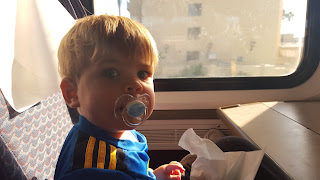 As a Civil Engineer who builds grade separations, one of the things I quickly noticed was that north of LA Union Station there were significantly more at grade crossings (it was easy to tell because the train whistle, which I'd been excited waiting for at the onset of our trip was now blowing much more frequently).  Eventually the city gave way to rolling hills and eventually beautiful views of the Pacific Ocean.  I'd been worried we were on the wrong side of the train because we were on the east side headed into LA, but apparently the engines push into LA and pull out, so we were on the Ocean side for the short amount of time we traveled along the shore. 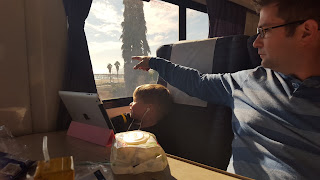 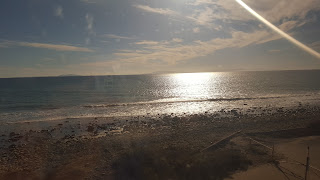 I was as anxious about getting off the train as I had been about getting on (okay, maybe a little less after 2 glasses of wine...) so we were at the doors probably a bit earlier than required, babies and luggage in hand.

We stepped off the train and onto the platform in beautiful Santa Barbara!

More about our beautiful vacation coming up next!
Posted by Amy at 3:25 PM